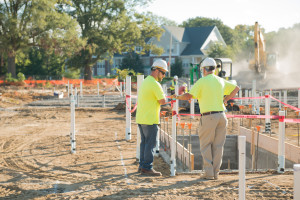 Clancy & Theys had a problem. The construction company had no trouble landing invitations to speak to potential clients in response to their requests for proposals (RFPs), but when it came time to present their message fell flat. During debriefings after the presentations Clancy & Theys executives heard the same complaint – clients just weren’t connecting with the company.

“Potential clients felt we had the knowledge and the qualifications to do the work, but over and over we heard that our presentations were lackluster and that they didn’t feel engaged with us,” said Holly McGuire, Administrative Operations Manager at the Clancy & Theys Newport News office. “The entire process was tough on our engineers giving the presentations and we knew we needed help.”

Holly asked her network for recommendations for a business coach and Shelley Smith of Premier Rapport was suggested. Interested to learn more, Holly invited Shelley to the office to talk about her executive coaching services.

“Her presentation to us was exactly what we wanted our presentations to potential customers to be like,” Holly said. “We knew immediately that she was the person we needed.”

The company’s most pressing concern was improving the quality of their presentations and connecting on a deeper level with potential clients. Every team member who spoke during presentations was brought in for the training. Employees were paired up and given plans for a potential project, then each team presented to Shelley as if she were the potential client. Shelley paid special attention to certain aspects, including body language and the tendency of some presenters to fidget while speaking. She also offered advice about word choice, such as avoiding filler words like “um.”

As with any major change, there was some resistance from employees. “At first there were lots of eye rolls,” said Holly, laughing. “Everyone was a little rough at the beginning. As we went through the process, some of the employees noticed the progress others were making and they didn’t want to look bad by comparison so they worked harder to improve.”

Shelley also helped Clancy & Theys with their presentation decks. The slides were cluttered and she helped refine the information so the audience wasn’t overwhelmed with data.

Almost immediately after Shelley’s one-on-one work with the presenters, Clancy & Theys was awarded several new construction contracts. Excited about their success, the next question the company’s management asked was “What can we do to further develop our employees?”

The Importance of Inclusion 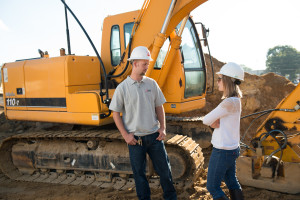 “Our company’s focus is more on inclusion than engagement,” Holly explained. “Rather than just making sure employees are interested during the workday, we also want to make them part of the process and make sure they are getting more in return than just a paycheck.”

Shelley introduced the Predictive Index® (PI), a behavioral assessment tool that gets to the heart of an individual’s communication style and motivations.

“We wanted to know, on an individual level, what motivates our people and what we can do to keep them happy,” Holly said. “We wanted to shake up the status quo.”

After getting started on the PI with Shelley, Clancy & Theys chose to take further assessments in-house. Holly worked with Shelley to learn how to interpret PI results and how toput that intelligence to use with team members.

“It is really all about using communication to manage expectations,” Holly explained. “Everyone has a unique personality and knowing what motivates individuals really helps employees work together more effectively.”

Holly has been putting PI results to good use with current team members, but she has also been using the assessment to recruit new employees. They currently have three open positions and have used the PI to help them compile job descriptions and to guide discussion during interviews.

“The PI takes the interview process to another level,” Holly said. “We are able to use it as a guide to compare and contrast the profile we have created with the profiles of the candidates we interview. It has taken a lot of the mystery out of hiring because we know exactly who we are looking for.”

The Pros of Conflict

Working with Shelley also proved to be a huge help for site superintendents working on out-of-state projects. They are far from the comforts of home and also have to deal with the monumental task of managing a complex construction project, meeting client expectations, and juggling subcontractors and permits.

“It is not a big secret that we are hired to handle conflict on projects,” Holly said. “That is what clients pay us to do. They want to hear us say ‘We’ve got it covered’ and know that we really mean it and can back it up with action.”

Rather than ignoring conflict and wishing it away, Clancy & Theys tackled the issue head-on. By investing in conflict management training with Shelley and giving their site superintendents an edge, they also made themselves more marketable.

“Shelley prepared our site superintendents for the difficult conversations that will inevitably come up,” Holly said. “Conflict is constant in their work and they are always going to need tools to help them deal effectively with those potentially fierce conversations.”

Change Starts at the Top

Bill Goggins, Vice President and CEO of Clancy & Theys’ Virginia Division,
does a great deal of presenting to clients. He, too, sat in on Shelley’s sessions and, as a result, has noticed improvements in his delivery.

“Through our work with Shelley we have streamlined our proposal and presentation processes,” Bill said. “We have shifted our focus from ‘us’ to ‘them.’ Once we are selected for the RFP interview stage, the client already knows who we are and that we are qualified to complete their project. What they want to know is HOW we are going to build it and HOW we are going to make the project a success.”

Bill is pleased with the more targeted approach and feels it removes some of the “fear factor” for team members who deliver presentations to clients. “Our employees have renewed their confidence and improved their delivery,” he said. “Clients need to be assured their project will be completed by a confident, knowledgeable team of experts. Shelley’s coaching has enhanced our team’s ability to do just that, and in the end makes everyone’s jobs much easier – including mine.” 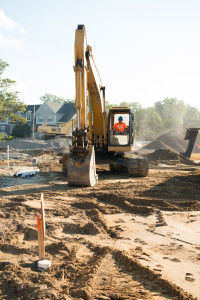 ng up the Momentum

Holly
continues towork with Shelley as a consultant for her work with the PI. Ultimately Holly would like to have every Clancy & Theys employee complete a PI assessment and is currently working on a pretty tall order – administering the PI to an additional 60+ employees.

“Shelley is a positive force,” Holly said. “We had worked with other consultants in the past but the conversations always seemed to just stop. Information was presented and disseminated, but it was never enforced. Working with Shelley keeps everything fresh because we are living and breathing what we have learned. She is incredible at what she does and keeps us moving forward. That is the real difference.”

Ready to take the next step and learn how Premier Rapport can give your company the edge it needs? Contact Shelley Smith at Shelley@Premierrapport.com to get started.