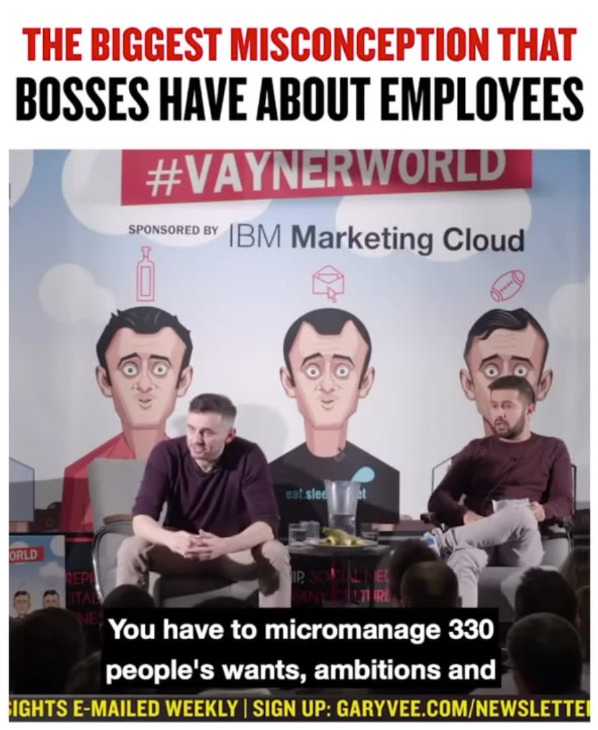 You may have heard that you have to focus on workplace culture and strengthening employee engagement if you want to grow your business today.

And I understand why you may think that.

Because in article after article, speech after speech, you see that philosophy being pumped everywhere all day every day.

Then every business that spends time developing their teams and sending them to ‘learning retreats’ would already be experiencing substantial, consistent growth.

And we all know that’s not the case.

So what do organizations who are having the MOST success with their workplace culture today have in common?

Well, recently I was watching a video about workplace culture, where a business owner in the audience stood up and asked Gary Vaynerchuck, CEO of Vayner Media…

“What’s your advice on building a great culture within a company?”

Now, if you don’t already know, in addition to being an influencer, Gary Vaynerchuck runs a successful, $100 MM media agency and at the time, had over 650 employees.

In fact, the business owner who asked the question had 330 employees of his own.

And when Gary V replied, he said three things that were really profound but they also set off an alarm in my head. He said…

#1: “If you think people work for you, as the CEO or Founder of a company vs. you working for them…you will never ever ever build a good culture in a company.”

#2: “There are no ‘blanket rules’. You have to micromanage 330 people’s wants ambitions and needs on an everyday basis, predicated on what else is happening in their lives day after day, month after month and year after year…so you have to figure out what drives them.

Now, on the surface, all of that makes perfect sense and these are extremely important points for you to key in on.

And obviously Gary V is an amazing business leader so this isn’t a knock on him at all.

But the reason the alarms started ringing in my brain as I listened was because there’s a gaping hole in what he shared that many business leaders will miss.

Because what Gary V didn’t say was…

Even if you are a CEO, founder, or business leader who genuinely wants to put your employees first…

You can have all the tools, resources and infrastructure available to you and still get everything wrong because…

First people have to understand what RIGHT looks like.

Because if you don’t have a system for building your company’s internal ‘muscle memory’ for what RIGHT looks like as it relates to employee engagement, workplace culture, and talent strategy…

You’ll probably never feel as fulfilled or successful as you’d like to in your career.

That may sound harsh but think of it this way.

When you’re putting any puzzle together, the most important first piece is the picture on the box.

For example, if you put two teams in separate rooms with identical puzzles to solve…

Versus Team B who has all the pieces but no idea what the end result was supposed to look like when they started?

Which team would you rather be a part of?

Which team would you invest in?

Which team will be more efficient?

Which team is gonna have more fun?

Which team would you rather lead?

Of course, I’m oversimplifying here, but this is playing out every day across organizations worldwide.

In fact, according to The 2020 State of Talent Optimization Report by The Predictive Index…

Execs attribute 72% of their company’s value to their employees.

Yet, only 36% of companies have a talent strategy.

And worse, a mere 12% of companies align their talent strategy with their business strategy.

Whether you have a huge multinational organization with thousands of employees…

Or you have 330 employees and you want to know how to build a great company culture like the gentleman that asked Gary V how to do it.

You have to ask yourself…

Why are so many businesses getting this wrong?

In my experience, the reason companies can’t build up the internal ‘muscle memory’ for what RIGHT looks like is because they have systems for everything in their business…

EXCEPT for how to properly identify and solve the recurring issues that are breaking down your team dynamics and synergy.

And as a result…

It’s costing you and your organization MUCH more than you realize, both personally and professionally.

“For a business to survive and thrive, 100 percent of all the systems must be functioning and accountable. For example: An airplane is a system of systems. If an airplane takes off and the fuel system fails, there often is a crash. The same things happen in business. It’s not the systems that you know about that are the problem – it’s the systems you are not aware of that cause you to crash” – Robert Kiyosaki

You LITERALLY can’t afford to allow apathy to creep in.

Because if you take your company culture for granted…

…if you keep thinking workplace culture is a ‘soft’ topic.

You’ll find yourself in charge of a sinking ship that’s gushing money from all sides.

Because you ignored the warning signs.

If we’re being honest, by then, most people won’t be willing to help you salvage what’s left.

It’ll be too late.

All eyes are on YOU.

At some point, I have to stop and figure out what right looks like…

So you can build that out in a way that allows your B-Team to become your A-Team.

That’s how you scale one-on-one context to multiple employees and team members.

So now, as you add new team members over time…

You get into a rhythm where everyone understands and can SEE the collective values you’re living and working towards at work.

And more importantly, you will have taught every single person in the organization what right looks like…

To the point where they’re emulating what right looks like, from a BEHAVIORAL standpoint.

No more navel-gazing and patting yourselves on the back for Cracker Jack Box *transformation* that didn’t lead to better business results.

Now, I know your plate might be full right now with all the things you’re trying to achieve.

And I understand that.

It’s funny because years ago when I was running divisions at Marriott International, sometimes family and friends would say things like…

“Must be nice to…

be in charge of a team of employees…”

But you know what?

Nobody told me it ‘must be nice’…

…when you’re working harder than ever and it still feels like you’ll never get everything done.

Never heard someone say ‘must be nice’ when employees disengage and sick days are through the roof.

No one said ‘must be nice’ when your team is on overload so they’re asking for more FTEs so they can get everything done.

…but you’re worried you’ll lose some of your best people in the process.

…all which add extra layers of something else for me to manage, measure and put in place.”

But how could they know?

Leaders understand the cost of becoming great – and that cost is high.

In the short term…

In the long run, it’s a small price to pay if it means enjoying greater peace of mind, productivity, and profits…

With a life, career or business that is worthy of your true potential.

Which is why, until you commit to making the necessary shifts as a leader (and team)…

The only possible outcome is you…

Feeling stuck, depleted and burnt out.

Trying to survive a toxic workplace…

…because some small part of you still believes in the people and the mission.

So if your company is experiencing any of the following…

…you don’t have to shoulder the responsibility to change it by yourself.

But you are responsible.

The good news is, you only need 3 things.

You simply need a PROVEN process.

The commitment to putting it into action.

And someone to keep you and your organization accountable.

That’s where my A.C.C.™ Model comes into play.

My clients benefit from fresh takes on time-tested approaches that engage their workforce while stimulating a healthy workplace culture, growth and greater cost efficiency.

The naysayers suggest that the only way to get along is to go along.

But let’s be honest…

Who wants that kind of work-life?

My A.C.C.™ Model focuses on the 3 key steps that only the most successful businesses use to shift their culture today…

To see how my clients get amazing results, I created a download and a short video to share the exact process with you.

No hype. No selling.

Just straight up coaching you can use right now. 👇 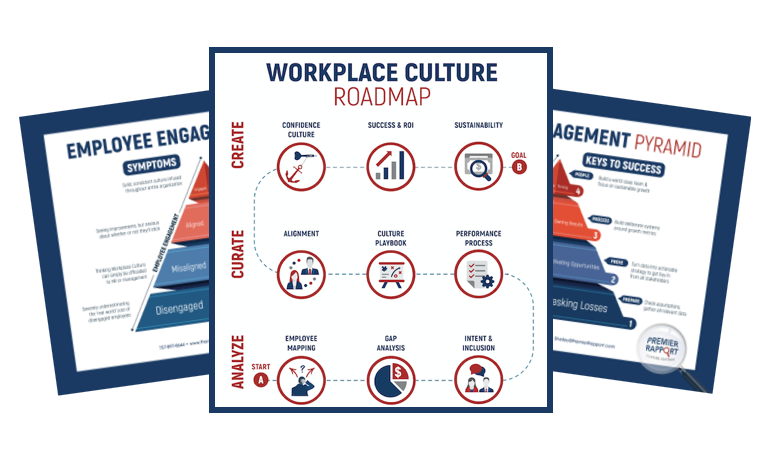